The coloring of this engraving by Giorgio Ghisi represents a conundrum for the museum. The painting of prints—often by artists trained specifically for the purpose—became a common and perfectly acceptable practice as early as the fifteenth century; however, in most instances of which we’re aware, the colors were added in order to further enliven the print’s imagery. We suspect that in the case of the Ghisi a former owner, possibly as early as the eighteenth century, had the areas surrounding the image toned merely as decoration, much in the way colored mats might be used today. We were thus faced with the question as to whether in this case it might be more appropriate to have the pigments removed.

In the end, though, any decision regarding the conservation of the print was made as soon as the paint was applied. The coloring can never be fully removed, and there is some doubt whether even most of it will come off the sheet during cleaning. Furthermore, since the pigments are likely gouache—a heavy, opaque watercolor—the risk of them migrating into the image during the bathing process necessary for their removal is quite high. The museum has thus resolved to allow the coloring to remain.

Note: The engraving was removed from its acidic secondary sheet some time ago. To demonstrate the full extent of the color decoration, the print has been here reattached to its backing, using four plastic corner mounts, with an acid-free paper placed immediately behind to protect it from any further damage.

Palmer Museum of Art, The Pennsylvania State University, Gift of Mrs. Francis E. Hyslop Jr., from her husband’s collection and given in his memory 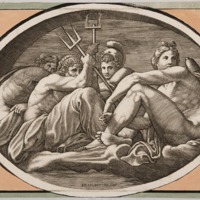