Intercession of St. Lawrence on behalf of St. Henry

Intercession of St. Lawrence on behalf of St. Henry

The condition of this page from Anton Koberger’s edition of Lives of the Saints is not bad considering it was printed more than five hundred years ago. Nonetheless, since that time it has suffered nearly the full range of the kind of damage that can be inflicted upon paper (of which much, if not most, likely occurred relatively recently, after the page was removed from the book). Its surface is soiled; tears and losses have been inexpertly repaired. At one time it was mounted in an acidic mat with pressure-sensitive tape, some of which still remains on the verso. It has been exposed to too much light, darkening the sheet and rendering it brittle in places. And the evidence of foxing suggests—though not surprisingly, given the age of the book from which it comes—exposure to high levels of humidity.

For some time the museum had been reluctant to address these damages. Much of the conservation would involve washing, and we know in the very least that the green coloring in the illustration is soluble. Just as importantly, the book page has been a significant component in the museum’s teaching. Recently however, we’ve acquired several additional incunabula (examples of texts printed prior to the sixteenth century), and advances in conservation techniques (particularly the feasibility of float washing, which could approach the staining without threatening the hand-colored image with moisture) now make the possibility of cleaning the sheet worth exploring. So following the exhibition, this leaf from Lives of the Saints will be sent to our paper conservator for a full evaluation. 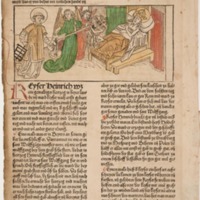