This study for a WPA mural, now lost but probably executed somewhere in Michigan (George Fisher was a longtime resident of Detroit), was donated to the Palmer Museum in the condition as it is seen here. The adhesive residue that surrounds—and at one point covers—the image is likely not the responsibility of a previous owner but rather a framer, who, according to one feasible scenario, in response to a last minute request from the artist to prepare the drawing for exhibition, hurriedly dashed the glue along all four sides to attach the sheet to its window mat.

The drawing currently sits rather low on the priority list for conservation. The adhesive residue is stable—which is to say, no further staining will occur as long as we keep it in a space with appropriate temperature and humidity—and the image is not scheduled to be included in a forthcoming exhibition. When it is sent to the conservator, we anticipate that most if not all of the residue will be removed with only a slight shadow of the stain remaining visible. 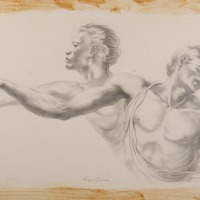