Gerardo Belfiore’s Watts Street was transferred to the Palmer Museum in June 1994 from the College of Engineering, where it likely had been hanging in an office, exposed day in and day out to natural as well as artificial light, for nearly sixty years. Additional damage occurred from its mounting, during which a pressure sensitive tape was employed to attach the lithograph to its backing.

When the print is sent to the conservation studio, the tape residue can be removed, possibly to the extent that it is no longer obvious. The success in treating the light burn, on the other hand, depends in large part to the quality of the paper. Watts Street was created under the auspices of the WPA’s Federal Arts Project, a program set up during the Great Depression to put artists back to work. Understandably, the quality of materials was not the highest concern of the WPA, and so while this sheet appears to be of a better caliber than the Benton lithographs, it is clearly not as fine as the one that supports the Cassatt drypoint. Our hope is that the burning can be mitigated to the point where it no longer detracts from the pleasure of viewing the image. 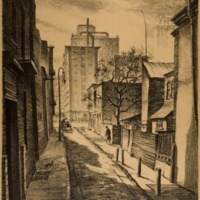