Margot Wearing a Large Bonnet Seated in an Armchair

Margot Wearing a Large Bonnet Seated in an Armchair

This charming portrait of Margot Lux, a neighborhood girl whom Cassatt depicted on many occasions beginning around 1895, came to us laid down on an acidic board and mounted in an acidic mat. Although these materials did inflict a significant amount of burning, the majority of the damage (the extent of which can be seen in the photograph taken just after the museum acquired the print) was caused by too many years—no doubt several decades—of daily exposure to light. The drypoint was sent to a paper conservator, who, after removing the sheet from its backing, managed to return it to almost its original condition with gentle bathing and bleaching. (The dark rectangle surrounding the image of Margot is a purposeful result from the initial printing.)

Removing the sheet from its backing, together with the cleaning, allowed a closer look at the drypoint. We were able to discern a watermark—a translucent image pressed into the sheet by its manufacturer—which identifies this example as likely coming not from a posthumous printing, as was previously assumed, but from an edition sanctioned and overseen by the artist in 1923. The conservation effort in this instance thus not only delivered to the museum a print we can now proudly display, it enabled us to discover that the drypoint, since it was printed during the artist’s lifetime, is more important than we initially thought. 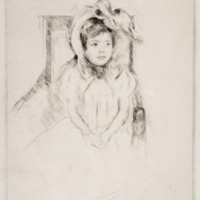 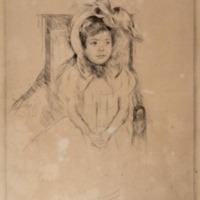